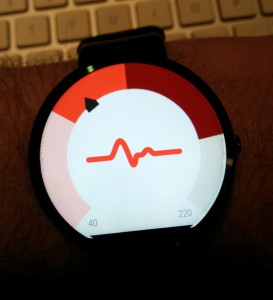 – from Santa Claus is Coming to Town,
by Haven Gillespie / J. Fred Coots

Stephen Wolfram made headlines back in 2012 when he revealed that he had been “life logging” for over twenty years. But by now many of us are doing this almost incidentally, through wearable sensors from the likes of Fitbit and Jawbone and smartwatches with health features like Motorola’s Moto360 with its heart rate monitor and pedometer – see photo above. And by dint of knowing where you are and where you’ve been, Google were able to add an activity summary card to Google Now that attempts to guess (with varying degrees of accuracy) how much walking or cycling you have been doing.

And here we find ourselves on the horns of a dilemma – by aggregating and applying machine learning to health and activity data (really, as much data as possible) and medical records, we can suggest interventions and lifestyle changes and monitor their effectiveness, potentially across a huge population – think of those billions of Android users. Marry this with cheap $99 next generation gene sequencing from the likes of 23andMe and we are really heading for a step change in public health from a move to a more proactive approach to medicine. However, the potential for abuse is massive, as we’ve recently seen in relation to alleged improprieties at Uber. As one commentator put it: “Deleting Uber? Uber won’t delete you.”