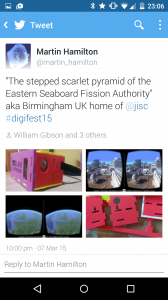 Google Cardboard came out of a “20% project” by David Coz and Damien Henry at the Google Cultural Institute in Paris, and launched last summer at Google’s IO developer conference. IO attendees are accustomed to receiving gifts of the latest Google hardware like smartphones, tablets or laptops, so you can imagine that being given a piece of cardboard might initially have been something of a disappointment. Here’s how it unfolded, courtesy of TechCrunch’s Greg Kumparak…

Fast forward to early 2015 and Google has quietly turned virtual reality into a paying business by giving away the Cardboard design specs, so anyone can make compatible virtual reality viewers. It also makes software development kits (SDK) freely available for Android and the popular Unity 3D environment. In turn Google makes money from the sale of Cardboard compatible apps through its commission on Play Store sales.

What’s really telling about Cardboard is that it shows you actually already had virtually all the hardware you needed for virtual reality – in your pocket. Perhaps the message here is that the smartphone has already usurped the nascent virtual reality viewer product category, as it absorbed much of the market for digital cameras, music players, maps, books etc. And as the screenshot at the top of the post alludes to, perhaps we are finally approaching the world envisaged by William Gibson in his seminal cyberpunk novels.

Educators and e-learning specialists attending digifest15 told me that they were very excited by Google Cardboard, due to its immediate availability and low cost. What can you see yourself using it for?

2 thoughts on “The Quiet Rise of Google Cardboard”